Root For Your Cause

Home Root For Your Cause

Root For Your Cause 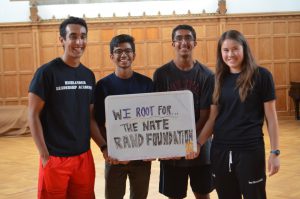 This past Saturday, we had the opportunity to represent the APO Gamma Chapter at the Root for Your Cause water pong tournament. The environment was the right mix of friendly competition and genuine appreciation. It also felt refreshing realizing that no matter what the outcome, the money was going to an organization that was helping others. The best feeling, however, was not winning some water pong tournament; it was knowing that we, as an organization, could do something so small yet so fun while making a meaningful difference for the Nate Rand Fund.

– Sachin Pathangey & Ishan Sharma, Winners of Root For Your Cause 2017 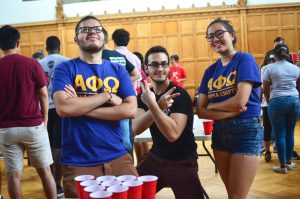 This past weekend was the 6th installment of Root For Your Cause, the annual philanthropy root beer pong tournament sponsored by Alpha Phi Omega-Gamma Chapter. Several APO teams competed in the pong tournament while brothers spectated, cheered them on, and enjoyed root beer floats. The event raised $606 for APO’s philanthropy (Nathaniel Rand Fund).

The tournament started off with 42 teams from a few different organizations. Several tables were set up in the Willard Straight Memorial room, where chaos ensued as the tournament began and the room was filled with the sounds of bouncing ping pong balls and enthusiastic shouting. After over an hour and a half of elimination play, two teams moved through the brackets to make it to the final round. The finals were a best two of three match between two APO teams, with the team Banana (shoutout to Ishan and Sachin) ultimately prevailing to secure the money for APO’s charity. It was the first time APO has had a team not only in the finals but also winning the tournament! Thanks to all the brothers managing, participating, and spectating, the event was a smashing success and we can’t wait for next year!
-Amrit Hingorani and Tara van Nieuwstadt, Finalists in Root For Your Cause 2017 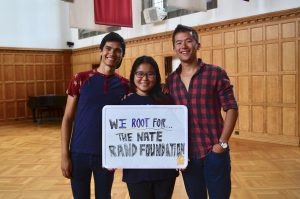 Gamma chapter exceeded my expectations. They came out in greater numbers, with more enthusiasm, and apparently with a greater performance than anyone else at Root for Your Cause. It went well, and now our philanthropy program is off to a great start early in the year.
-Ivan Rios, Philanthropy Assistant