This past Saturday, I and five other brave Gamma brothers braved the early morning hours and volunteered at Tompkins Regional Airport as victims for their Full-Scale Disaster Drill. The drill, which is conducted every three years, puts emergency first responders to the test and is meant to simulate a small commercial aircraft crashing on the tarmac. The FAA mandates this drill and its entirety is observed and recorded for learning purposes. The drill includes portions dedicated to fire suppression, fuselage breach (think Jaws of Life), and medical services. While the fire and breach drills were pretty straightforward for emergency services, simulating the injuries and loss of human life created the need for 42 volunteers from the Ithaca area to play the part of victims. This is where we came in. 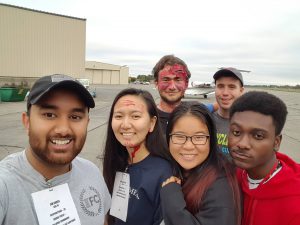 I’m sure many of the readers of this blog have met us and know that, while there are some outstanding actors in the Gamma chapter, we are definitely not first pick when it comes to charades. We were all given new identities with varying degrees of injury, and makeup to help us look bloodied up and feel pretty for our action movie debut.

On a normal Saturday at 6AM, I’d be Armaan and asleep, but today I played Jim Vance, an 18 year old kid on his way to visit Cornell as a prospective student. Luckily, I walked away from the crash relatively unharmed. Also some of the lucky ones were Bentley Mills, a 65 year old man with upper arm pain, and an unnamed 21 year old female with an abrasion to the forehead and side of head. You may ask yourself, how lucky can someone be with an abrasion to the forehead and side of the head, but trust me, in this plane crash there were far worse injuries. Unfortunately, the rest of the Gamma volunteers did not make it out of the crash alive and suffered severe injuries ranging from penetrating trauma to full body burns. Sean, Holly, and I made it off the flight alive, however, Winnie, Shea, and Zach did not. Let me clarify again that this was all simulated by makeup and acting and that none of us were actually harmed throughout this service event! RISK was MANAGED.

As an aspiring actor (who needs engineering anyways?), I really dove deep into the part of 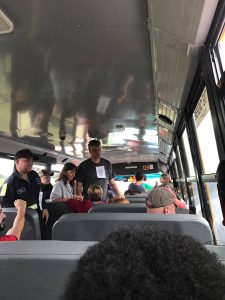 Jim Vance. Let me walk you through the events as they unfolded. I’m sitting on the flight next to a girl around my age (played by Zach… he is a very versatile actor). She’s an urban planning major at Cornell and is telling me about her favorite interstates. It’s not that I don’t find American transportation infrastructure interesting, it’s just that the whole time I can’t get the thought out of my head as to why it is that cats always seem to get stuck in trees and dogs don’t. Like why isn’t the fire department ever called for a golden retriever stuck ina tree? Sitting in front of me was an elderly gentleman (played by Sean). When I first got onto the flight, he had introduced himself at Bentley Mills, or as his grandkids called him, Big Booty Bentley. He was a 65 year old, former investment banker and world class hula hoop performer. A couple of rows in front of me, I overhear two girls, I’m assuming students as well, discussing their plans for the weekend (played by Holly and Winnie), something about a 21st birthday or something like that. Another Cornell student (played by Shea) is sitting to my left across the aisle watching youtube videos on his phone. I didn’t even think that we’d get cell service up here. 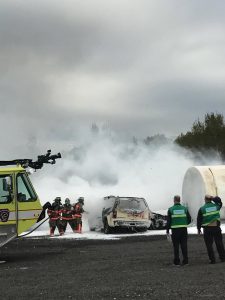 I’m surrounded by all of these interesting people while I’m just sitting here trying to drown out my thoughts by staring out the window onto the barren swath of what is upstate New York. Now, you know that feeling of anticipation where times seems to slow down to a snail’s pace as you watch the microwave countdown the seconds heating up last night’s pizza? Think the exact opposite of that. One moment we’re sitting on the flight on final approach into Ithaca, happy as a dog with two tails, the next we’re on the ground, plane on fire, with firetrucks racing towards us. The scene around me was gruesome, so I’ll save you the details. Thefire on the fuselage was quickly put out and a door was opened for us to leave from. Big Booty Bentley and I, among the few, were able to walk off the flight under our own power, albeit with a slight limp. The rest had to be carried off the wreckage via backboard stretcher. While we sat in the shadow of the Tompkins County Mass Casualty Unit truck, we realized that many of those carried off were not alive. EMS units from all over the area were on the scene, processing victims and transporting them to Cayuga Medical Center or to the Gutherie Robert Packer Hospital in Sayre, Pennsylvania for severe trauma cases. All in all, I was lucky to be alive.

Back to the perspective of Armaan, this event was really interesting and honestly somewhat difficult. Like I said, we are not the best actors, so there was some humor in all of this. I would be lying to you if I said that I could tell you my name was Jim Vance or walk with an exaggerated limp without cracking a smile. In all seriousness though, we tried our best to simulate this type of disasterso the first responders get the best practice possible incase this ever happens in real life. The fuselage of the aircraft was simulated with a school bus while the fire suppression and fuselage breach were practiced on cars near us. Every aspect of the drill went forward well and first responders, including Cornell EMS (woo LGR!), did an excellent job of treating the victims. Although our few hours as actors came to an end and we had to go back to being stressed Cornell students, we’ll always be able to tell people at parties that we were involved in a fake plane crash.

-Armaan Jhunjhnuwala, “Jim Vance, 18yo boy with a limping leg” 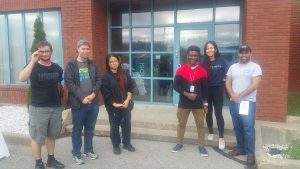 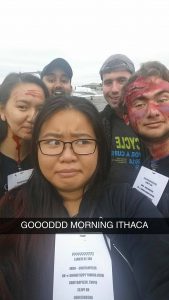 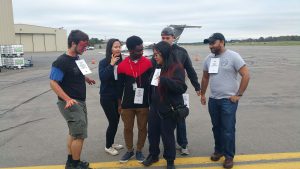