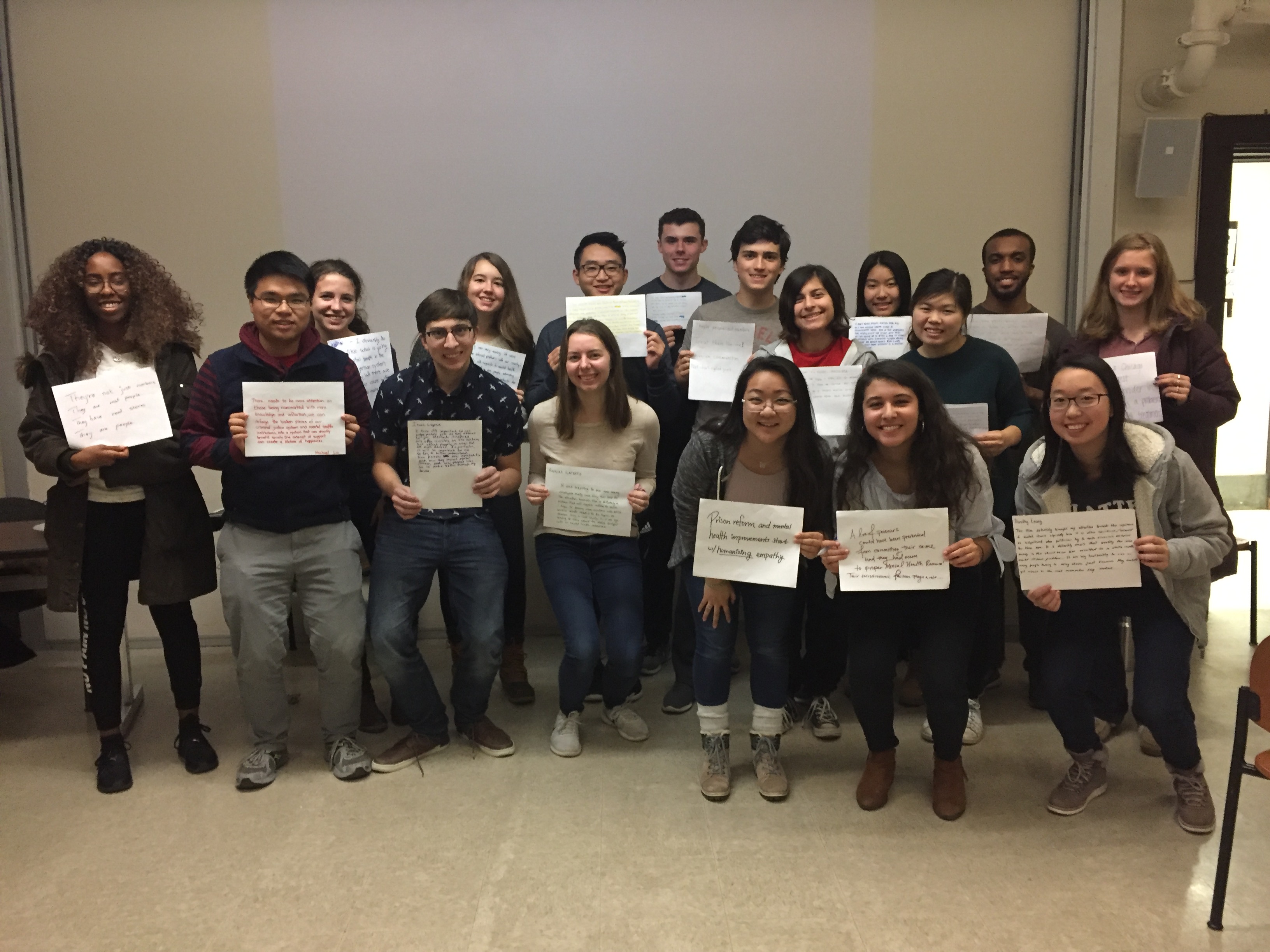 At the Jenkins & Marvels service mixer, brothers and pledges watched a short video about mental health in the prison system, specifically at the Cook Country Jail in Chicago, followed by reflection. Here are some thoughts our brothers shared:

“They’re not just numbers. They are real people. They have real stories. They are people.”

“The fact that a Chicago prison is the largest health care provider in the country shows a problem with the accessibility of treatment.”

“A lot of prisoners could have been prevented from committing their crime had they had access to proper mental health resources! Their socioeconomic position plays a role…”

“The sheriff said that it’s almost IMPOSSIBLE for inmates to break the cycle & stay out of prison after they’re released. It made me wonder how much better their lives would be if prisons received funding for programs to support inmates after their release.”

“Remove the stigma that prisoners derive to suffer from mental illness.”

“In some places, mental health care is better in prison than it is out of it, which needs to change. Politicians need to see prisoners as the people they are, instead of just numbers, or just another part of the budget.”

“The huge social and monetary impacts resulting from the closure of the 6 Chicago area mental health centers was eye-opening, and the lack of any restorative efforts even more so. Increasing funding/accessibility of mental health facilities will most likely decrease total government expenditures.”

“There needs to be more attention on those being incarcerated. With more knowledge and reflection, we can reforge the broken pieces of our criminal justice system and mental health institutions, into a system that can directly benefit society. One attempt at support can create a lifetime of happiness.”

“I believe that there needs to be awareness about the underrepresentation of mental health in minority communities. We should work more on preventative services to help those who are struggling before they fall into incarceration and other detrimental things.”

Some brothers want to get more involved!

“This documentary was very moving. We were truly able to see the internal problems with our country’s prison system, especially with regards to mental health. It is good to hear that there are people advocating to improve this issue but there are also many setbacks due to budget cuts. Personally, I could become more involved in service events regarding prison reform. My pledge project has to do with spreading awareness of some issues in our prison system.”

“It was inspiring to see how many employees really were doing their best for the situation, however, this is definitely a problem that will require reform to solve. I hope to become more involved with APO’s service events related to the topic. As someone living in Cook County, IL, it was eye-opening to learn about the state’s budget cuts on mental health resources.”

Check out this video to learn more:
https://youtu.be/-fQ50a-m92Y