Dump, Run, and Save Money and the Environment!

Home Dump, Run, and Save Money and the Environment! 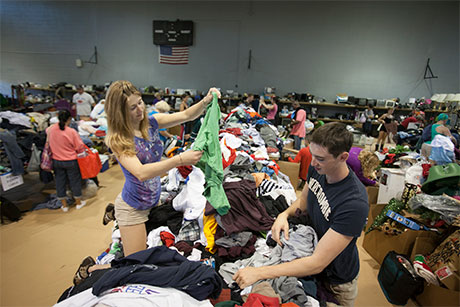 Dump, Run, and Save Money and the Environment!

Every year, the Dump and Run sale is enjoyed by hundreds of locals, freshmen, and upperclassmen alike, who make the trek to Helen Newman Hall before sunrise to get a good spot in line for the best deals! Essentially a giant thrift store, the dump and run sells used clothing and other items, all left in the rooms of college freshmen, at super cheap prices (every shirt I sold was under $5!) This is not only a great way for people moving in to not spend so much money, but it also keeps all of these items out of the landfill, which is super important. And even more important than that, all of the proceeds benefit organizations such as Cops, Kids, and Toys, NAMI, and the Ithaca United Way.

I volunteered as a pricer, someone who goes through all of the items a person has collected and totals up how much it will be. For me, the most interesting thing was when people argued about the price I told them. For the one thing, I have the final say. But above and beyond that, you are getting such an incredible deal and it all saves the world and helps others. So when people would argue about a $3 versus $5 dress, I would be stunned! But other than that, it was incredible to see what people left in their dorm rooms! From Keurigs to sofas, the dump and run sale had it all. It took volunteers nearly the whole summer to organize it all and to put this huge event on so kudos for all of the hard work they did!